It’s never too late to re-discover the unbridled joy of play.

In this wordless, situational comedy, The Old Man, who lives alone, prepares to celebrate his birthday. To his surprise, the solitary festivities are interrupted when a playful Red Balloon floats into his apartment, shaking up his normal routine. The Balloon teases and delights the Old Man, reminding him the power of play, laughter, and friendship. Through spectacular physical comedy in the tradition of Charlie Chaplin, the two enjoy a surprising number of adventures.

The public ASL Interpreted Performance is on April 20, 2019 2:00pm. Central to Seattle Children’s Theatre’s mission is a commitment to serving diverse communities including the Deaf and Hard-of-Hearing. Tickets for American Sign Language-interpreted performances are available throughout the season online or through the box office.

The public Audio Described Performance is on April 20, 2019 at 2:00pm. Central to Seattle Children’s Theatre’s mission is a commitment to serving diverse communities including those with low vision or blindness. Tickets for audio described performances are available throughout the season online or through the box office at (206) 441-3322.

On April 7, 2019 at 11:00am, we are pleased to present this special performance giving children and families a world-class theatre experience modified for those with sensory needs. It’s part of our mission to provide youth of all ages access to professional theatre. We understand every child is different, and strive to make this a successful trip for everyone. 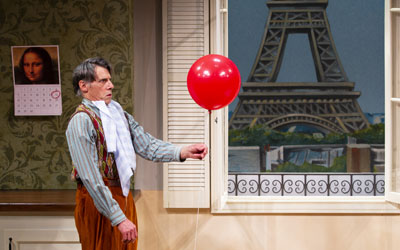 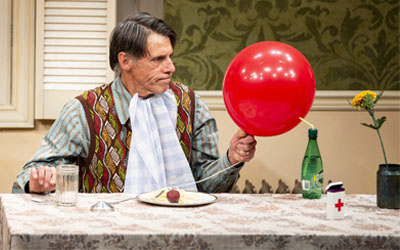 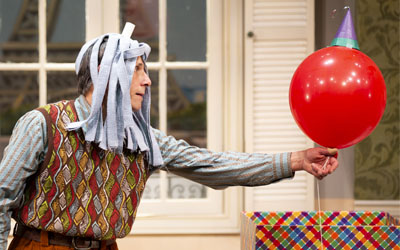 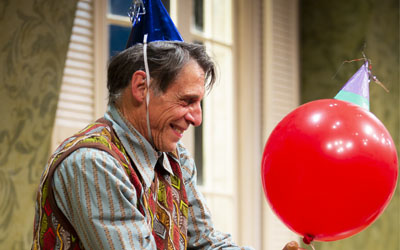 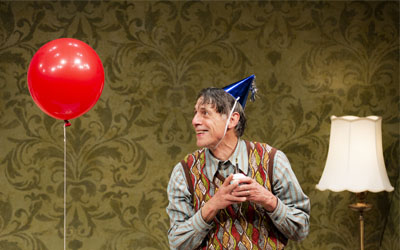 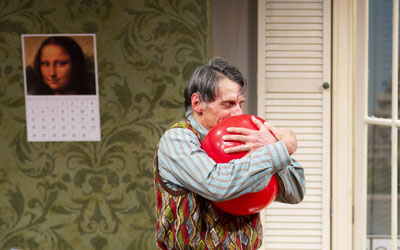 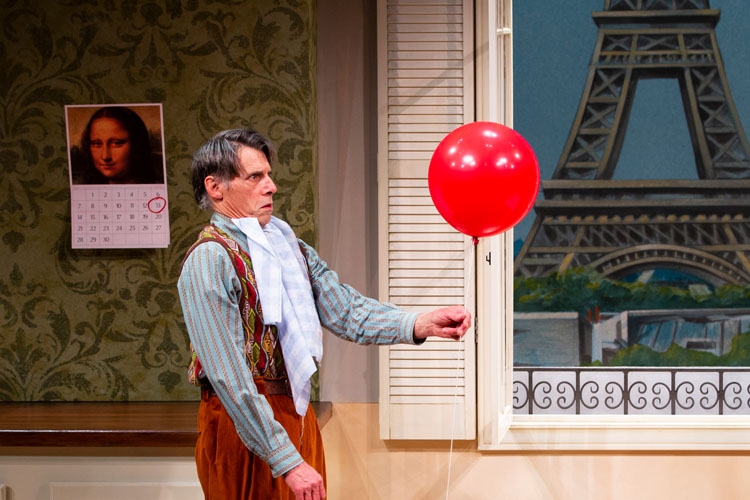 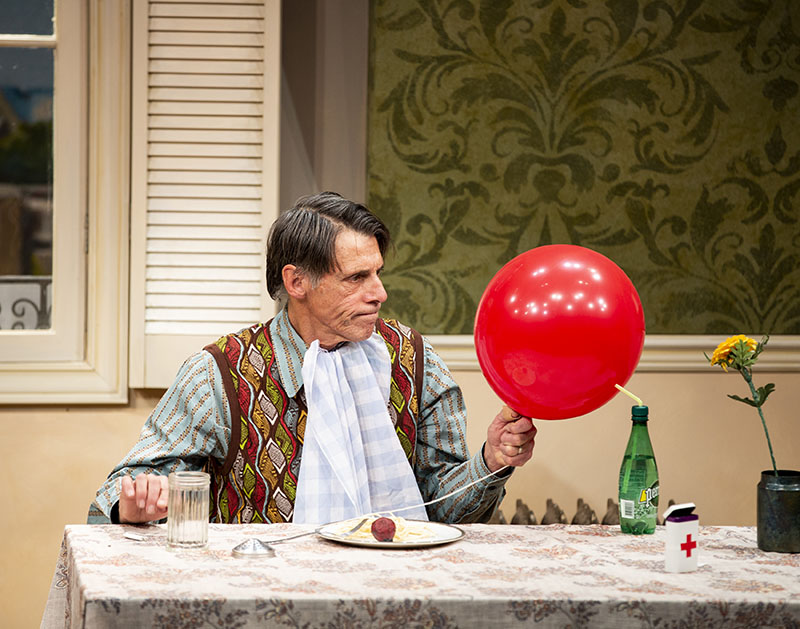 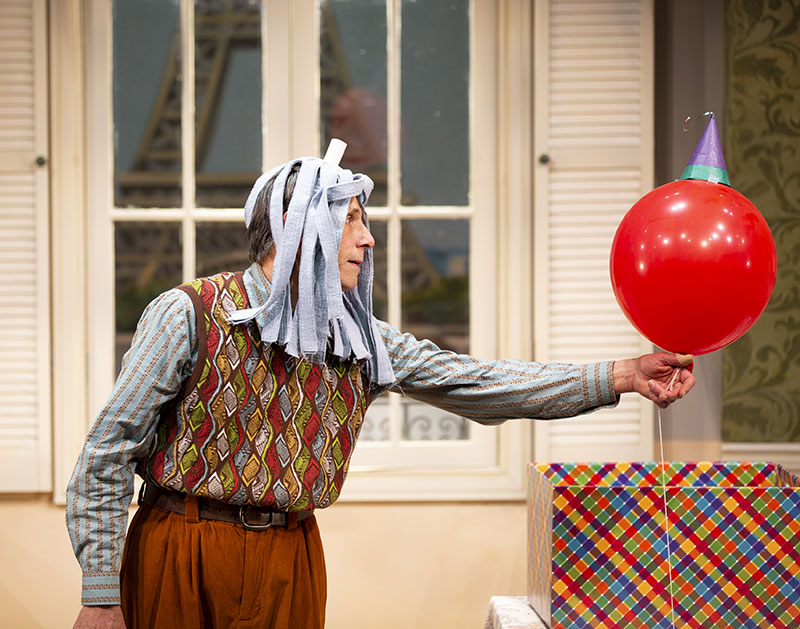 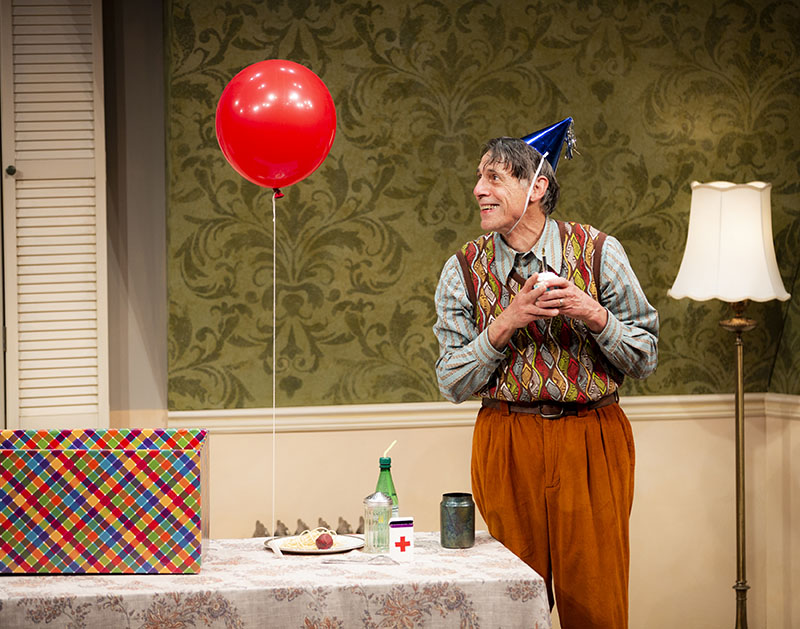 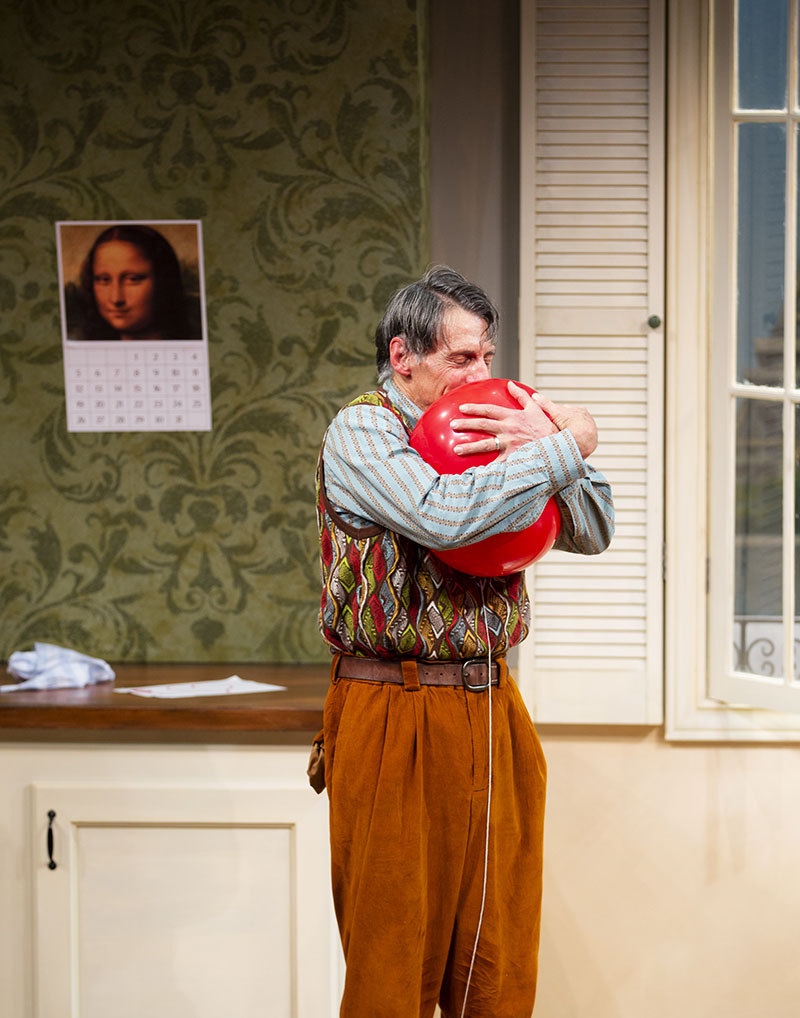 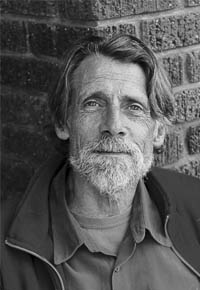 Mr. Moore is again delighted to return to SCT, where he first performed 36 years ago.  Your parents may have seen him at SCT when they were children.  The role of Old Man in Balloonacy adds to a long list of SCT characters that include, among others, a frog, a lion, a rat, a bear, a dog, an owl, a tigger, a donkey, a classy lady, Santa Claus, several friends, many fathers and uncles, and Cyrano. Todd occasionally performs for adults as well.  But right now, he is helping to build a house for his two wonderful grandsons, Diego and Nico, and their parents.  Soon there will be enough room so that Todd's granddaughter, Lucia, and her parents, can come and visit.  That makes Todd very happy. 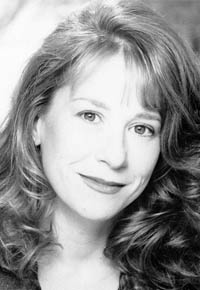 Vickielee is absolutely buoyant to be in the company of Balloonacy!  She has been seen frequently at Seattle Children’s Theatre, and favorites include Good Night Moon, Go Dog Go, James & the Giant Peach, Dot & Ziggy, Frog & Toad, Lilly’s Purple Plastic Purse, Stellaluna, and most recently Naked Mole Rat Gets Dressed. Vickielee has toured extensively throughout the US, Japan, Canada, and Europe. Favorite stage roles include Kate (Taming of the Shrew), Annie Sullivan (The Miracle Worker), Brunnhilde (Das Barbecu), and Menopause the Musical (Housewife). When not playing with balloons, she regularly rocks out with cover band The Usual Suspects, and raises money for kids’ causes. 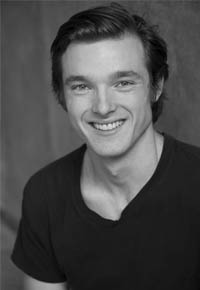 Evan is a Montana-born performer, musician, and lifelong learner who is delighted to make his Seattle Children’s Theatre debut. He recently played Isaac in ArtsWest’s production of HIR, and composed and music directed Journey West! The Legend of Lewis & Clark at Theatre Off Jackson. When he's not engaging directly with the arts, you’ll find him in the mountains, waters, and forests of the northwest. He holds a BFA in Acting from Cornish College of the Arts, where he now works as a piano accompanist. 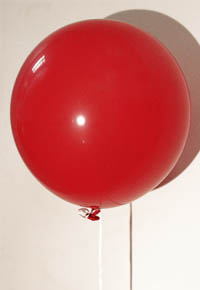 Red is floating on air to be making their SCT debut.They always dreamed of stardom, but never expected to be bestowed with such an honor. Though some may wonder if this newfound stardom has gone to their head, they want to reassure everyone that they are doing their best to stay grounded. When not on stage, Red enjoys making new friends, playing games, and hopes to grow up to be a hot air balloon.

Rita has close to 40 years of experience in professional theatre locally and across the country. Recent SCT credits: The Lamp is the Moon, Into the West, Brooklyn Bridge, The Garden of Rikki Tikki Tavi, Pippi Longstocking, and Crash. She has been directing at SCT steadily since 1981, so the full list is long and varied, and includes: A Year with Frog and Toad, Harold and the Purple Crayon, The Borrowers, Getting Near to Baby, If You Give a Mouse a Cookie, I Was a Rat!, A Tale of Two Cities, and Hamlet. Other Seattle-area credits include work with Seattle Shakespeare Company, Seattle Public Theatre, Seattle Rep, ACT, The Empty Space, Village Theatre, TAG, Theater Schmeater, Center Stage, Unexpected Productions, and Stark/Raving Theatre. Ms. Giomi is the Artistic Associate at SCT, and from 1993 to 2007, she served as the Artistic Director of SCT’s Young Actor Institute.

Michael arrived in Seattle in 1980, directly after two seasons at the Oregon Shakespeare Festival. He then began stage managing at Seattle’s Skid Road Theatre, where he first worked with Linda Hartzell in Grease. That same year he worked with Rita Giomi on Delusions of Reference.  Mr. Paul has stage managed locally at the Seattle Repertory Theatre (most recently In the Heights), ACT, Intiman, and the 5th Avenue Theatre. National credits include The Guthrie; Shakespeare Theatre in DC; Oregon Shakespeare Theatre; Milwaukee Repertory Theatre; Cincinnati Playhouse in the Park; Actor’s Theatre of Louisville, Humana Festival; La Jolla Playhouse; Baltimore’s Center Stage; Manhattan Theatre Club and the late Alaska Repertory Theatre.  For Seattle Children’s Theatre:  Addy, An American Girl Story, Night of the Living Dead, Harold and the Purple Crayon, Cat in the Hat, Pippi Longstocking, Dick Whittington and his Cat, Elephant and Piggy - We Are In A Play! and, most recently, Naked Mole Rat Gets Dressed: The Rock Experience.

Andrea is happy to be returning to Seattle Children’s Theatre, having designed Balloonacy last season.   She is a scenic designer who works with many companies across town including Village Theatre, Intiman Theater, Book-It Repertory Theater, Seattle Shakespeare Company, Seattle Public Theater, Contemporary Classics,  Azeotrope, and Cornish College of the Arts.  She was formerly an Ensemble member and resident designer at Washington Ensemble Theatre. Andrea is a MFA graduate from UW where she is currently on staff in the Scene Shop.  She received the 2010 Gregory Award for outstanding scenic design.

Sarah Burch Gordon has been designing costumes in Seattle since 2005. She is beyond delighted to be designing Red Riding Hood. Other local favorite designs include: Balloonacy at SCT; Dracula, The Trial of Ebenezer Scrooge, Jane Eyre, and Persuasion at Taproot Theatre Company; and A Midsummer Night’s Dream at Edmonds Community College. This season, she will be designing costumes for The Best Summer Ever as well. Other than the pandemic induced sabbatical, she has been the Costume Shop Head here at SCT since 2017.  Prior to that, she worked at Taproot Theatre Company as their Resident Costume Designer and Costume Shop Manager. Before moving to Seattle, she taught Costume Design at Mars Hill University in North Carolina. Other regional credits include working at Southern Appalachian Repertory Theatre, StageWest Theatre, and Venture Theatre Company. She is a two-time Gregory Award nominee and received her MFA in Costume Design from Temple University. In addition to being a costume designer, Sarah is an artist, writer, editor, and fairy godmother extraordinaire. Roses and parsnips to CLM.

Chris is very happy to be returning as resident sound designer for SCT. In Seattle, he has designed at The Seattle Repertory Theatre, ACT, Intiman, and The 5th Avenue. In California, he’s designed at The Old Globe Theatre, La Jolla Playhouse, Mark Taper Forum, Geffen Playhouse, and ACT (San Francisco). He spent seven seasons as the resident designer at American Repertory Theatre in Boston, designing over forty productions while there. He has also designed in New York, Houston, Philadelphia, Princeton, Providence, Chicago, Washington D.C., and Phoenix, as well as internationally in Singapore, Taiwan, and Moscow.  Commercially, he has designed for Intel, Harvard University, Starbucks, and Popcap Games. He holds a degree in Classical Piano performance from Cornish College of the Arts.

Thorn is a Seattle-based lighting designer for theatre, dance, and opera. Her recent designs include: O+E, The Tender Land, and Robin Hood with Seattle Opera; I Do! I Do! with Village Theatre; Fire Season, Hand to God, and Ironbound (Gregory Award Nominee for Outstanding Lighting Design, 2018) with Seattle Public Theater; Brooklyn Bridge with Seattle Children’s Theatre; The Brief Wondrous Life of Oscar Wao and Jane Eyre with Book-It Repertory Theatre; Strictly Seattle, Next Fest Northwest, and The Bridge Project with Velocity Dance Center; and The Two-Character Play with Civic Rep (Gregory nominee, Lighting Design). As the 2016-2017 Hemsley intern, Thorn served as Assistant Lighting Designer and Assistant Lighting Supervisor for New York City Ballet, Lincoln Center Festival, Alvin Ailey American Dance Theater, and San Francisco Opera. She holds an MFA in Lighting Design from University of Washington (2016). For more about her work, please visit www.thornmichaels.com.

Skunk on a String
Thao Lam

A Birthday for Bear
Bonny Becker

The Red Book
Barbara Lehman
A wordless book where a child finds a lonely red book lying in the street and brings it in from the cold. Inside the book is a map, and as you look closer there is a real child on a beach looking back at the first child. They see each other and the adventure of making friends begins.

For Adults Working with Children:

Let’s Get This Party Started: DIY Celebrations for You and Your Kids to Create Together
Soleil Moon Frye

Birthdays: Beyond Cake and Ice Cream
Nikki Tate and Dani Tate-Stratton
Around the world people celebrate birthdays in different ways. Not everyone eats cake, decorates with balloons, and plays party games. In this book we learn about some of the earliest birthday celebrations and how the day is celebrated around the world and in different stages of life.