Covid vaccines/negative tests are required to enter our building. Review our detailed policy before your visit: http://www.sct.org/safety.

Get Ready For… Circus-Style Adventure!

In Air Play umbrellas fly, fabrics soar over the audience, balloons swallow people, and snow swirls, filling the stage.  With stunning images and gales of laughter, Air Play bounces on the edge of definition: part comedy, part sculpture, part circus, part theater.  No translation necessary in this circus-style adventure of two siblings journeying through a surreal land of air, Air Play transforms ordinary objects into uncommon beauty.  Great for all ages, this production creates beauty and inspires laughter across cultures and continents.

To purchase tickets for in-person performances at SCT, please click the “Tickets to Air Play” button above, or click on the calendar below

Digital performance released for viewing on June 1. Streaming will close at 11:59pm on June 12. Though you may view the play as many times as you like in this time frame, streaming will be limited to two devices per purchase.

Click here to purchase the digital performance of Air Play.

For Educators and Classrooms:

Starting now, bring the magic of SCT to your classroom with our 21-22 Digital Productions.

Click here to purchase the digital performance of Air Play for your classroom.

Please select the ticket amount that reflects the percentage of free/reduced lunch at your school. If you need further assistance please contact the SCT Field Trip Coordinator at fieldtrips@sct.org

The Audio Described Performance of Airplay is June 4, 2022 at 1:00 p.m! Central to Seattle Children’s Theatre’s mission is a commitment to serving diverse communities including those with low vision or blindness. To request this service, please contact the Ticket Office at tickets@sct.org or 206.441.3322.

The Sensory Friendly/Relaxed Performance for Air Play will be June 12, 2022 at 11 a.m.! We are pleased to present this special performance giving children and families a world-class theatre experience modified for those with sensory needs. It’s part of our mission to provide youth of all ages access to professional theatre. We understand every child is different, and strive to make this a successful trip for everyone. Tickets for sensory friendly performances both in person and digital will be available throughout the season online or through the box office at (206) 441-3322 once tickets go on sale.

“A joy from start to finish.” 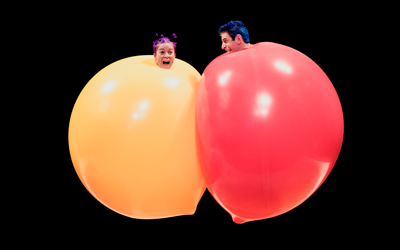 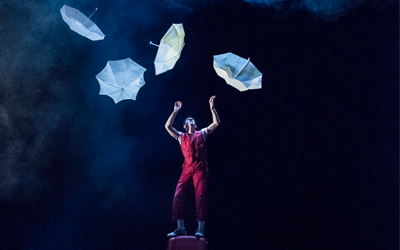 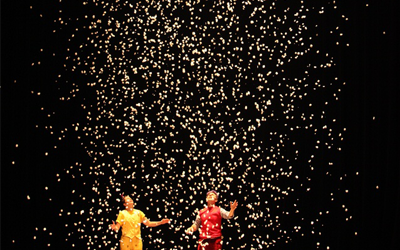 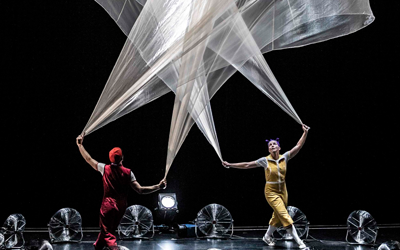 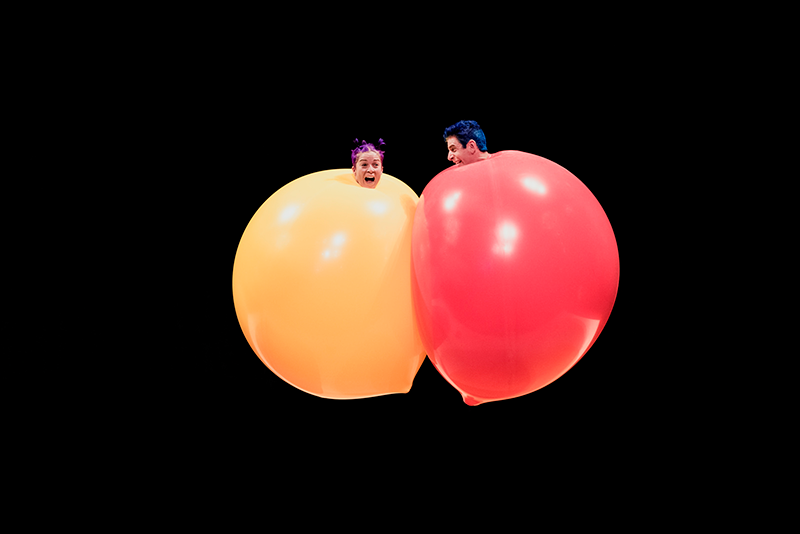 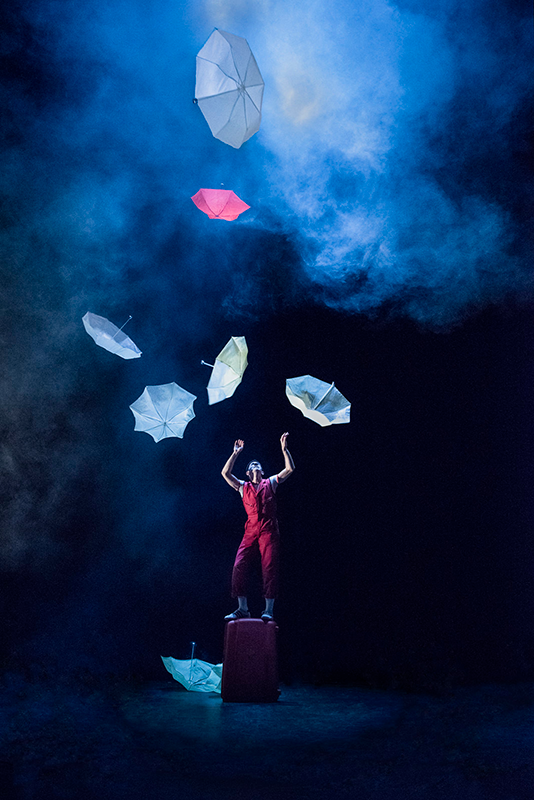 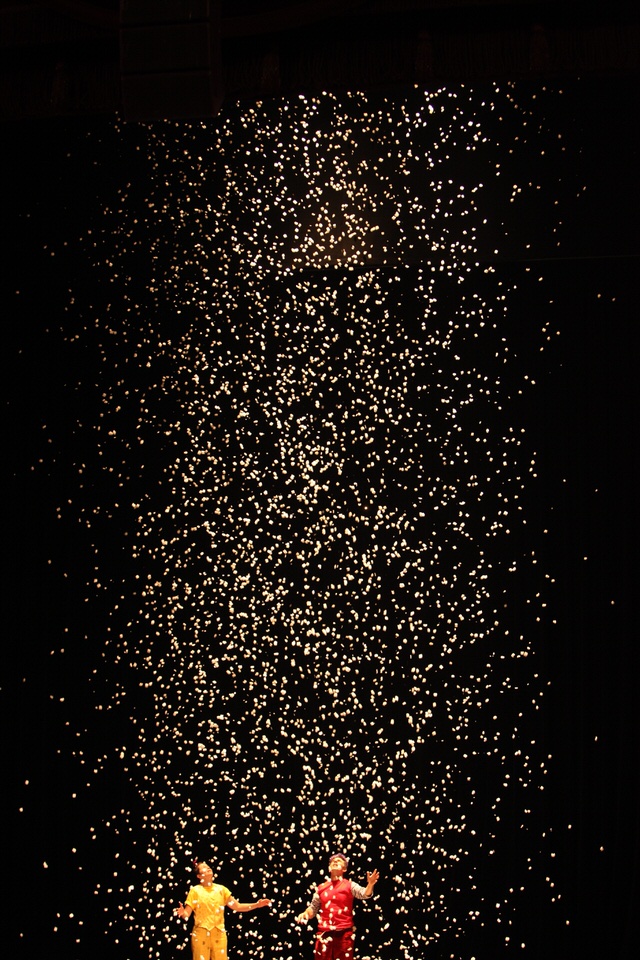 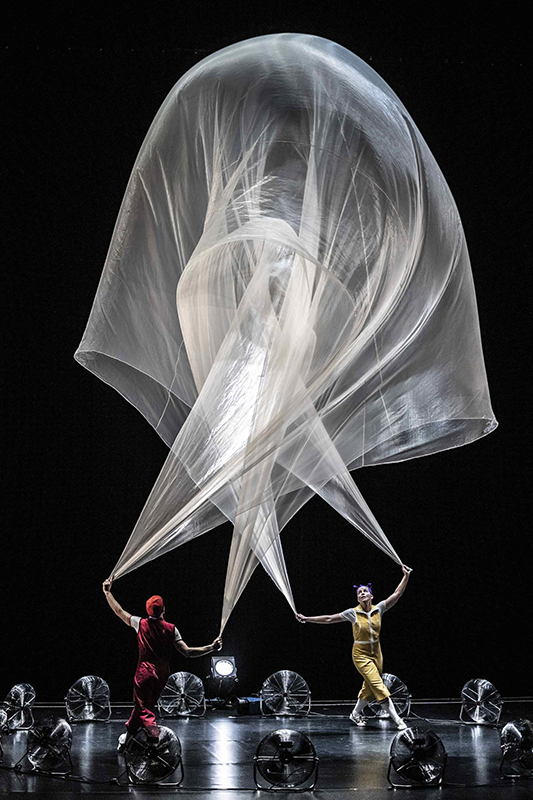 The Acrobuffos -Seth Bloom and Christina Gelsone- are the creators, writers, and performers of Air Play. Seth and Christina met at a circus in Afghanistan, became engaged while street performing in Scotland, married in China, and occasionally go home to New York City.  Specializing in non-verbal physical theater and comedy, Seth and Christina have created seven shows together, competed in international circus festivals, performed in over 28 countries, headlined at the Big Apple Circus, and were even featured on a postage. Visit their website: acrobuffos.com.

Seth Bloom (Creator and Performer) grew up in India, Kenya, and Sri Lanka. Seth spent many years touring the USA as a professional juggler and silent comedian, and worked extensively in Afghanistan with the Mobile Mini Circus for Children. Seth studied circus clowning at Ringling Brothers Clown College, Lecoq theater at LISPA (MFA), and commedia at Dell’Arte School of Physical Theatre. A graduate of Wesleyan University, Seth has performed in 30 countries and 49 US States.

Christina Gelsone (Creator and Performer) grew up in Texas and has worked in 40 countries as a non-verbal clown, stilt walker, mask performer, juggler, puppeteer and acrobat. Previously a ballet dancer, Christina majored in Shakespeare at Princeton University and studied corporeal mime at the Dell’Arte School of Physical Theatre. For years, Christina worked in multiple post-war zones with New York City-based Bond Street Theatre. Other professional adventures include starting a social circus program in Egypt and teaching at universities.

Daniel Wurtzel (Air Sculptor) is a New York artist best known for his kinetic sculptures using air and lightweight materials that fly. Daniel’s sculptures have been featured on Broadway, Cirque du Soleil, the Olympics, and with theater directors such as Julie Taymor, Diane Paulus, Robert Lepage, and Zhang Yimou. Museums around the world, including the Musee Rodin, Museu Nacional d'Art de Catalunya, and the Museu do Amanha in Rio de Janeiro, display Daniel’s work. danielwurtzel.com

West Hyler (Director) is a theater director equally at home in the circus or on Broadway. In circus, West was story writer and scene director for Paramour, Cirque du Soleil's first Broadway musical, and twice directed Big Apple Circus. As Associate Director for Jersey Boys, he staged the show on five continents.  West is the Producing Artistic Director of the New York Musical Festival and continues to develop new work. westhyler.com

Flora Vassar (Stage Manager and Lighting Supervisor) has toured with Air Play since its 2015 premiere, for over 320 performances in 83 venues worldwide. She spent several years stage managing and building props in the greater Philadelphia/NYC area and is now based in Maine.

The Acrobuffos -Seth Bloom and Christina Gelsone- are the creators, writers, and performers of Air Play. Seth and Christina met at a circus in Afghanistan, became engaged while street performing in Scotland, married in China, and occasionally go home to New York City.  Specializing in non-verbal physical theater and comedy, Seth and Christina have created seven shows together, competed in international circus festivals, performed in over 28 countries, headlined at the Big Apple Circus, and were even featured on a postage. Visit their website: acrobuffos.com.